Understanding the Bible | See All The Videos. Go to the: 30 Second Video Menu

Where Did Cain Get His Wife?

This is a question that I considered not worth bothering with. But it's a question with serious implications that cannot be ignored.

The answer is that Cain married his sister, or maybe a niece. We have strong prohibitions against that now, but it was not a problem then.

Why do we prohibit marrying a close relative today? Because there is a very high risk of genetic defects. Adam and Eve were created perfect. But when Adam sinned that brought death into the world and the perfection was lost. Over the generations genetic mutations began to build up. Slowly at first. But, by the time of Moses they had beome significant and there was a problem. If you had children with a close relative, it is likely you would have the same mutations, with the result being those mutations will combine to produce serious genetic defects in your children. If you have children with someone who is not closely related, you and your spouse are much less likely to have matching mutations, and your children will be stronger and healthier. So in Leviticus 18 God prohibits marrying a close relative. 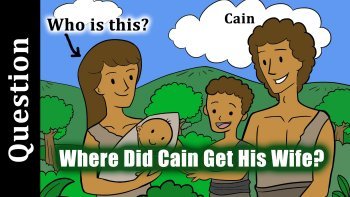 But then some make the point that God did not give the Ten Commandments, and the command to not murder, to Moses until roughly that same time. Yet God punished Cain for murdering Able, before there was a law against murder. It seems God is inconsistent.

This is an objection that comes from not understanding scripture and God's law.

There are three classes of law in the Old Testament: civil law, ceremonial law, and the moral law. God provided what we today call "civil laws" to protect His people. On the other hand, God's moral law describes God's character. The Ten Commandments are a summary of God's moral law. We are created in the image of God and are to have the character of God. Thus the moral law applies for all time. It applied to Cain and it applies to us today. It is for violating God's moral law that we earn the eternal consequences of separation from God.

Today God has given us government, and the duties of government include protecting people through implementing and enforcing civil laws. God's Old Testament civil laws no longer apply. They were for Israel several thousand years ago. It is now our civil government that has a prohibition against marrying a close relative. Civil laws, whether from God or government, are put into place when there is a problem that needs to be addressed. Prior to Moses there was no problem having children with a close relative, and thus no need for a law.

God does not give us the details of His relationship with Adam, Cain and Abel. However, in Genesis 4:6-7 God says to Cain (after rejecting Cain's offering): "Why are you angry? And why has your countenance fallen? If you do well, will not your countenance be lifted up? And if you do not do well, sin is crouching at the door; and its desire is for you, but you must master it." God talks to Cain about sin. God would not have said this unless Cain understood what sin was. And Cain would not lied about killing Abel (verse 9), if he did not know murder was wrong.

This illustrates a common fallacy. It goes like this: if the Bible does not explicitly record a historical event (God telling Cain about sin), that event never happened. Anyone claiming this does not understand the purpose of the Bible. The Bible is not intended to be an exhaustive history book. It is not intended to answer every question we might have. The main purpose of the Bible is to make God known to us; make our problem (sin) known to us; and make the solution known to us. In doing this the Bible tells us a lot abut history and science, but that is incidental to the main purposes of scripture.

Why Did God Allow Incest In The Bible? (GQ)

Who Was Cain's Wife (CIM)

Before you get the good news, you need to know the bad news. It's about you. God says:

All have sinned and fall short of the glory of God. - Romans 3:23

Sin means disobeying God, aka breaking God's law. God is perfect and perfection is required to enter heaven. It's a standard none of us can achieve. We all fall short. For example, compare yourself with just one of the Ten Commandments. Have you ever told a lie?

All liars, their part will be in the lake that burns with fire and brimstone, which is the second death. - Revelation 21:8. Or what about:

Have you ever taken something that does not belong to you, no matter how small? Have you ever looked at another person with lust? In Matthew 5 Jesus said:

Everyone who looks at a woman with lust for her has already committed adultery with her in his heart.' Have you done that?

Unless there was someone willing to pay that penalty on your behalf. Someone who will take on themselves the consequences you deserve. And there is. There is one person who can and will do that. That person is Jesus Christ. If you trust this is true (believe), and repent (turn away from disobeying God), Jesus' death is applied to your account and you are freed from the penalty of sin to be with God forever.