Global Flood | See All The Videos. Go to the: 30 Second Video Menu

Dinosaur Tracks - The Result of a Global Flood?

Try this experiment. The next time it rains find some mud and walk in it. You'll make footprints in the mud. How long will those footprint last? It won't be very long before they are gone. The same with animal tracks, whether along a trail, near water. or on a beach. The tracks don't last long, and certainly not long enough to fossilize. 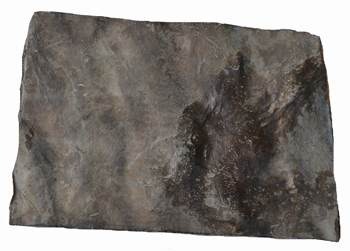 What are the leading secular theories about dinosaur tracks?. Basically there is only one. The dinosaurs walked along a lake or river shore; their mud tracks hardened in the sun; and a local flood caused the water to rise and bury the tracks. But there is no evidence that happened. In similar circumstances today the tracks wiped away by waves, wind, and rain before they can be covered by sediment and hardened into fossils. There is no reasonable secular theory explaining the existence of fossilized dinosaur tracks.

What about creation-based theories? The event that would provide the perfect conditions for creating fossilized footprints would be the global flood. But, secular geologists point out that the churning waters of the flood would quickly erode away the mud along with any footprints. 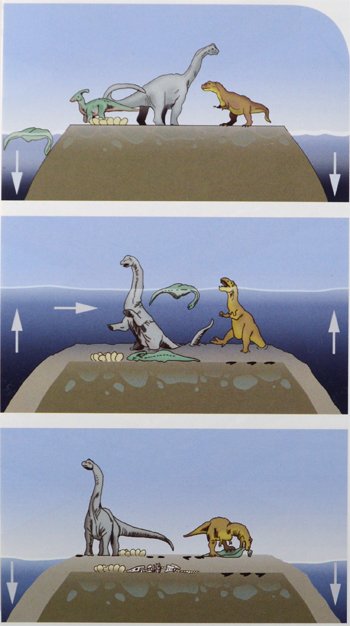 Briefly Exposed Deluvial Sediments (BEDS). In a previous video we talk about conditions during the flood. The flood waters would be rising and falling as the result of tsunamis and normal tides. The water, although continually rising, would sweep onto the land, then drain off briefly exposing new layers of mud (sediment) before the next wave, heavily laden with sediment, swept over the land. What we'd expect to see would be full footprints, partial footprints created by dinosaurs walking on tippy-toes, scraping footprints created by swimming dinosaurs still contacting the muddy bottom, and trackways that disappear as the dinosaur began floating. We'd also expect to see the dinosaurs generally moving in the same direction, away from the rising water. And this is exactly what is observed.

For fossils to form, whether they are bones or footprints, they must be dried quickly. Those are exactly the conditions during the global flood. The rising flood waters would pulverize rock, creating a huge load of sediment in the water. Layer after layer of sediment would be piled one on top of the other, quickly burying and protecting. dinosaur footprints. At the dinosaur track quarry mentioned in the video they have been digging out tracks since 1939. They have dug through about six feet of sediment, and it is layer after layer of sediment with tacks, nearly all made by the same type of dinosaur generally walking in a northwesterly direction. Although there are a few layers without tracks, most tracks are overlapping vertically showing that the tracks where mostly buried on a continuous basis. Fossilized ripples show that in many cases tracks were made and buried underwater. All of this evidence points in one direction, toward a global flood.

Note: The image above shows a dinosaur track (highlighted to make the track more visible) with water ripples. This footprint had to have been made under water.

In The Footsteps of Giants (CMI)