Age of the Earth

The question is: if the universe was created just 6,000 years ago, how can we see light from galaxies that are billions of light years away? That light would take billions of years to get here.

The Bible is about God. It's not a science book, and it's objective is not to teach science nor history. So we can not turn to a page in the Bible describing what God did, and find an explanation of how He did it. However, when the Bible does touch on science, it has never been shown to be wrong. Humans are curious. We look for answers, and it is interesting is that we live in a univere in which answers can be found. That would't be true in a universe that resulted from randomness. When we look at the universe, it appears to be a universe designed to be investigated, studied, and understood.

So how can we see light from galxies billions of light years away. There are a number of possibilities based on known physics. The one we'll discuss here is gravitational time dilation. There are two videos below, one of which presents a different theory by Dr. Jason Lisle.

Given that the universe is 6,000 years old (that information has been provided indirectly in the Bible by the one who created the universe), and using what we know about physics, the physical laws, astronomy, and how God normally works, what do we see? A very interesting picture in which time is not constant. Time passes at different rates depending on your location and the speed you are moving relative to other physical objects. This is difficult for us to imagine. We think of time as always progressing at the same rate... tick, tick, tick... but it doesn't. That the rate at which time passes varies, and this variation is called time dilation.

Understanding how the rate at which time passes varies is important. For example, your smart phone probably has the ability to determine your location based on GPS. The GPS satelites are in orbit around the earth and time passes at a different rate in the satelite than it does in your phone. That means the satelite design has to take that into account, if your location is to be correctly determined. 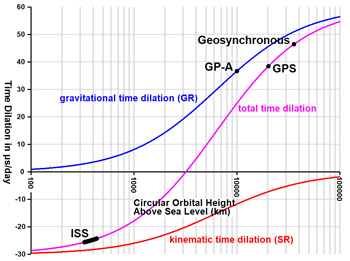 The chart to the right shows the relationship between how fast time passes and the distance from the center of the earth. The stronger the gravity field, the slower time runs. So, the closer you are to the center of the earth, the slower time runs. Will you personally notice any difference? No. Your watch, the time shown on your phone, all will show time passing at apparently the same rate as you've always seen time pass. But, let's say you have a twin, and they spent a year in the International Space Station. When they return at the end of a year, they will be .05 seconds younger than you.

The effect of time dilation on an astronaut in orbit is negligable. But, the larger the mass, the greater the effect. If you were to travel closer to the sun, it's greater gravity (greater mass) would result in a greater slowing of time. If you could move away from our galaxy, into the space between galaxies, time would pass much faster for you. The mass of the galaxy effects the rate at which time passes on earth, and moving away from the mass of the galaxy results in time passing faster.

Another fact we need to note is that the universe is exanding, and doing so at an increasing rate. Scientists have no explanation for this, other than to call on an invisible, undetectable, unknowable something that is causing the increase in the rate of expansion. All they do "know" is that this something is not God. Why? Because they don't want it to be God. But, that's another topic.

Since the universe is expanding, it must have been much smaller (denser) in the past. If the solar system were near the center of that mass, then time would pass very slowly on earth. As the universe expanded, and the solar system remained near the center of mass, time relative on earth would pass very slowly relative to the rest of the universe. The result will be that 6,000 years pass on earth, while billions of years pass for the farthest galaxies. That's factual science.

Is The Earth Near The Center of the Universe's Mass?

Recent data (earth telescope data and NASA's COBE, WMAP and PLANK satelites), indicates the earth is at or near the center of mass of the universe. This is not talking about geocentricity (please read this Science Pastor page). Many astronomers are not happy with this data, as the earth being in a special location in the universe is unacceptable. So they call the data anomalous. But, the facts are, we appear to be at or near the center.

What if it turns out we are not near the center? There are a half-dozen other theories that explain how we can see distant starlight in a 6,000 year old universe. A video talking about one of thoser is below. If the known facts show something dfifferent than what we currectly understand, it's not a problem.

Light-Travel Time: a Problem for the Big Bang (CIM)

What makes this good news is the bad news about you:

For all have sinned and fall short of the glory of God. - Romans 3:23

All liars, their part will be in the lake that burns with fire and brimstone, which is the second death. - Revelation 21:8

You have heard that it was said, ‘You shall not commit adultery’; but I say to you that everyone who looks at a woman with lust for her has already committed adultery with her in his heart.'

Unless there was someone willing to pay that penalty on your behalf. Someone who will take on themselves the consequences you deserve. And there is. There is one person who can and will do that. That person is Jesus Christ. If you trust this is true, and repent (turn away from disobeying God), Jesus' death is applied to your account and you are freed from the penalty of sin to be with God forever.