The Order Is Different!

Evolution Gets The Order of Creation Wrong! 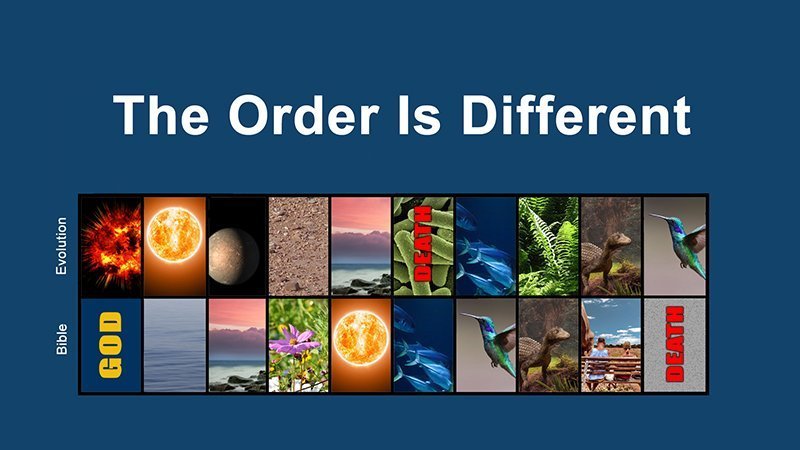 EVOLUTION: The sun forms before the earth.

THE BIBLE: The earth is created as a ball of water. Then dry land and then plants. AFTER THAT the sun, moon and stars are created.


EVOLUTION: Fish evolve into existence, then plants, next land animals, and finally, after millions and millions of years, birds.


EVOLUTION: Land animals evolved and then tens of millions of years later birds evolved from dinosaurs.

EVOLUTION: Death comes into the world as soon as the first single cell organism spontaneously forms from non-living chemicals.

THE BIBLE: Death does not enter the world until Adam disobeys God.

Based on evolution, death not only comes into the world before sin, but natural selection uses death as the tool to drive evolution. Based on evolution death is good because it eliminates weak mutations and selects improved organisms to reproduce and spread their "improvements." Based on the Bible death is our enemy and will be destroyed.

Based on evolution, since death came into the world before sin, it is not a consequence of sin. So, if evolution is true, why did Jesus die on the cross? .... Silence -- there is no answer. His death accomplished nothing. Death is a normal part of an evolving universe. Death simply gets rid of the unfit and those who are less able to survive. So Jesus died because he was less fit and there was no purpose for the cross. Christianity is a false, empty, religion.

What makes this good news is the bad news about you:

For all have sinned and fall short of the glory of God. - Romans 3:23

All liars, their part will be in the lake that burns with fire and brimstone, which is the second death. - Revelation 21:8

You have heard that it was said, ‘You shall not commit adultery’; but I say to you that everyone who looks at a woman with lust for her has already committed adultery with her in his heart.'

Unless there was someone willing to pay that penalty on your behalf. Someone who will take on themselves the consequences you deserve. And there is. There is one person who can and will do that. That person is Jesus Christ. If you trust this is true, and repent (turn away from disobeying God), Jesus' death is applied to your account and you are freed from the penalty of sin to be with God forever.