God And The Bible

Videos About God | See All The Videos. Go to the: 30 Second Video Menu 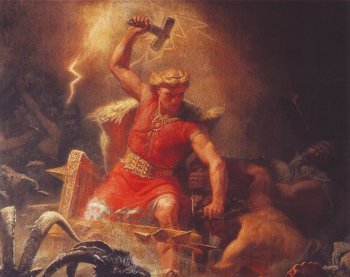 What does the Bible mean when it talks about God's wrath? For God it's not an out-of-control lashing out type of angry. The God of the Bible is not like the pagan gods (Thor pictured to the right), who had human characteristics including human out-of-control anger (wrath). God's wrath is His response to human sin and disobedience. Romans chapter one describes God's wrath... He gives them over to the lusts of their hearts. He gives them over to a depraved mind, to do those things which are not proper. In other words, God withdraws His restraint on sin and people do as they desire... and it's not good.:

As people turn away from God in disobedience, God withdraws from them, turning them over (reducing His restraint of sin) to their natural desires. Romans 1:18-32 describes this happening in three stages, as people continue to turn away from God.

For the wrath of God is revealed from heaven against all ungodliness and unrighteousness of men who suppress the truth in unrighteousness, because that which is known about God is evident within them; for God made it evident to them. For since the creation of the world His invisible attributes, His eternal power and divine nature, have been clearly seen, being understood through what has been made, so that they are without excuse. For even though they knew God, they did not honor Him as God or give thanks, but they became futile in their speculations, and their foolish heart was darkened. Professing to be wise, they became fools, and exchanged the glory of the incorruptible God for an image in the form of corruptible man and of birds and four-footed animals and crawling creatures.

Here is the first turning over, and what people do as a result:

Therefore God gave them over in the lusts of their hearts to impurity, so that their bodies would be dishonored among them. For they exchanged the truth of God for [p]a lie, and worshiped and served the creature rather than the Creator, who is blessed forever. Amen.

Why does God do this? Scripture does not specifically say. But based on the rest of scripture, God does this out of love. By turning us (people) over to our sin we experience what sin is like. We experience the temporal and spiritual consequences of sin. This should drive us to return to God. We see this happening in the book of Judges (Old Testament). If we don't return to God, He withdraws further, lessening His restraint of sin further. And things get worse.

For this reason God gave them over to degrading passions; for their women exchanged the natural function for that which is unnatural, and in the same way also the men abandoned the natural function of the woman and burned in their desire toward one another, men with men committing indecent acts and receiving in their own persons the due penalty of their error.

And if we continue to sin, God lessens His restrain on sin even further.

And just as they did not see fit to acknowledge God any longer, God gave them over to a depraved mind, to do those things which are not proper, being filled with all unrighteousness, wickedness, greed, evil; full of envy, murder, strife, deceit, malice; they are gossips, slanderers, haters of God, insolent, arrogant, boastful, inventors of evil, disobedient to parents, without understanding, untrustworthy, unloving, unmerciful; and although they know the ordinance of God, that those who practice such things are worthy of death, they not only do the same, but also give hearty approval to those who practice them.

Will You Experience God's Wrath?

If you are alive now (2020) yes. You are experiencing it to some degree. That's why the world seems so crazy. We, as a people, have turned away from God. So God is turning away from us, withdrawing His restraint of sin... and things are getting crazy.

But the key question is... will you experience God's wrath after you die?

What is the biblical understanding of the wrath of God? (GotQuestions.or Article)

Five Truths About the Wrath of God (Desiring God Article)