Smithsonian: Evolution Fails | See All The Videos. Go to the: 30 Second Video Menu

The Missing Link Is Still Missing

On the Smithsonian's Human Origins web site they talk a lot about the thousands of human fossils that have been found. Although it is not explicitly stated, it sounds like there is overwhelming fossil evidence for human evolution. But if we look at the details what do we see? The missing link is still missing. It is summarized in the "human family tree" shown on the web site. There are no transitional fossils. (See picture below.)

What Are We Seeing? 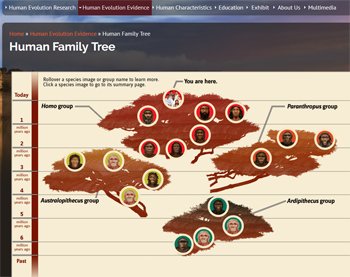 The Smithsonian's "Human Family Tree" shows four groups of fossils. The top group is labeled as "homo" and includes: homo sapiens; neanderthal; homo erectus, and other "homo" (meaning "human) fossils. All of these fossils are within the normal variation of humans living today. In fact, you probably have what is called Neanderthal DNA as a part of your DNA. This means all of these fossils are not separate human species showing stages of evolution... they are all fully human. What is shown on this "tree" is the human kind at the top, and variations of the ape kind in the other three "branches."

What Is A Species?

A very important point is that "species" is a human created classifiaction. It is part of a human system for categorizing life. Humans look at living things and attempt to put them into varies groups called species. And there can be significant disagreement on defining those species. However, the point is that God did not create species. People created species as a way to categorize life based on human ideas.

God created kinds, and there can be tremendous variation within a kind, including sufficient variation such that two animals of the same kind may not be able to breed. For example, there are rabbits in Florida that cannot breed with some species of rabbits in Canada... but they are both still rabbits. They are defined as different species by humans, but they are still the same God defined kind.

Scientists are still debating the meaning of the word "species." It is so nebulous that it can be stretched to include whatever they wish to include. There is no scientific bsais for linking humans and apes as having a common anscestor. For example, the chimp DNA similarity has been proven false. Classifying humans as a species of ape is not based on science, it is based on the wishful thinking of evolutionary theory. The fossils don't support it. DNA does not support it. And evolution has been demonstrated to be false over and over and over and over again.

Lucy is the famous Australopithecus afarensis fossil that was originally promoted as a dirct human ancestor from about three million years ago. She's now thought to have a common ancestor wijty humans, but she is not in the direct human evolutionary line. She is in the "bush" (the one with yellow highlighting) on the left side of the Smithsonian's tree. Lucy has been dwetermined to be fully an ape, most likley a bonabo. Lucy was thought to be a human ancestor because human footprints (called the Laetoli footprints) were found in the same layer of sediment. Since the feet were missing from the Lucy fossil, it was ASSUMED that an Australopithecus afarensis made the footprints. Since then other Australopithecus afarensis fossils have been found with foot bones. The feet are fully ape-like (not human). That leaves a big question. Who made the human footprints? Evolutionists say these can't be human because they don't match the evolution time-line... humans did not exist three million years ago. Yet the fossil footprints are there and everyone does agree they were made by humans who were as fully human as we are.

The Smithsonian web page with the "Human Family Tree" is: https://humanorigins.si.edu/evidence/human-family-tree