There's Room For All The Animals

How Could All The Animals Fit On Noah's Ark?

There are three aspects to this question:

(1) There were too many animals to fit: Noah did not need to fit all of the animals in the world on the ark. He was to bring two of every KIND (and 7 of some defined as "clean") of land animal that breathed through nostrils. Today we have many species and breeds. However, in Noah's day the original kinds were still living. One "kind" can include numerous species. That means one pair of each kind of animal would cover all possible species. For example, all of the dogs we have today came from just two (probably very much lke wolves) of the canine kind. It is estimated that, including extinct kinds such as dinosaurs, there were about 8,000 kinds in Noah's day. That means there would be about 16,000 animals on the ark. In order to have a conservative estimate, and cover unknowns, we typically use an estimate of 30,000 animals.

We'll see if 30,000 animals will fit when we take a look at the size of the ark. But first, there's another important question... 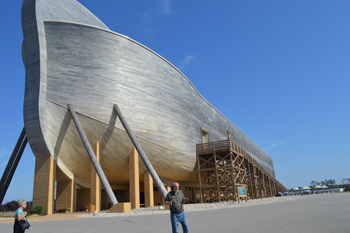 How did the big ones, like the huge dinosaurs, fit on the ark? Since there were dinosaurs on the ark, this is a good question. Sauropod dinosaurs could be 40 feet tall, 60 feet long and weight as much as 70 tons. Noah's ark was huge, but these dinosaurs are colossal. But, did Noah need to take the biggest ones? No. What makes sense is for Noah to take juveniles who were not only small, but they still had their entire reproductive life ahead of them. Remember, those who are on the ark will be repopulating the world. Based on this, and the fact that most animals are very small (mice, squirrels, birds, etc.), it is estimated that the average of the size of the animals on the ark was somewhat smaller than a sheep. So that gives us 30,000 sheep-sized animals. Was the ark big enough?

Based on the dimensions given in the Bible, the ark was 1.54 million cubic feet in size. It is estimated that cages for 30,000 sheep-sized animals would required about 84,000 cubic feet. That's less than 6% of the available space in the ark. The storage space required for enough food and water for a year would use another 25% of the space. That leaves two-thirds of the space in the ark available for structural parts of the ark, exercise areas, work areas, and living quarters for people... with plenty of room left over.

Noah's Ark had plenty of room.

How did all the animals fit on Noah’s Ark? (CMI)

How Could All the Animals Fit on the Ark? (AIG)

How Could All the Animals Get On Board Noah's Ark? (ICR)